On sunday march 1st the 12 finalists for the Miss Nederland 2015 pageant were selected at Studio 21 at Hilversum.
There were 100 girls invited to come to Hilversum. After the first round of competition with interviews and presentation in swimsuit, 25 girls were named semi-finalist. From this group the jury had to pick a group of finalists. The second round of competition consisted of more interviews and catwalk training by Sherien Sirvania, who competed at the Miss Nederland 2010 pageant.

1 girl will be crowned

Kim told us that during the finals one girl will be crowned Miss Nederland 2015. So there will be not a team Miss Nederland like in 2011, 2013 and 2014. When the Miss Universe and the Miss World pageant will be at the same time or it wil be impossible for the winner to enter both pageants the first runner-up will be prepared for one of the pageants. A pageant for both girls will then be selected which will be suited best for each of the girls.
Miss Nederland 2015 will have a hard act to follow as Yasmin became 3rd runner-up at the Miss Universe 2014 pageant and Tatjana became a semi-finalist at the Miss World 2014 pageant. 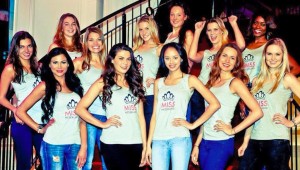