Miss Nederland 2020, Denise Speelman, the Corona finals and no Kim 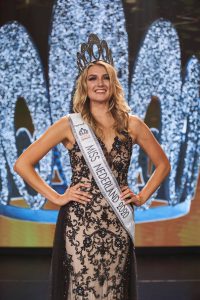 It’s always great to see how innovative people and organizations get, in times of crisis. The Miss Nederland organization already showed that a casting with a lot of restrictions was possible and so we were very curious on how the finals would be.
The finals of Miss Nederland 2020 were on Monday august 31st at Studio 21. Studio 21 has been the host for Miss Nederland for many years but in 2018 and 2019 the finals were held at the Circus theatre in Scheveningen and in Koonings Wedding Palace in Deurne.
So back in a familiar place but not with a real familiar atmosphere. The restrictions included no walking, no screaming and no banners. But most important and that would really be missed: no after party. The time and place to meet and greet the organization and the newly crowned Miss Nederland. In the restrictions was said very clearly: Once the new Miss Nederland is crowned, the audience has to leave immediately.
And even with all te restrictions, the virus still tried to have more impact on the finals. On social media we could read that one of the hosts of the finals, Rick Brandsteder had to cancel his gig as he had a rise in temperature and had to be tested. The other host was the lovely Miss Nederland 2018, Rahima Dirkse, who had her debut hosting a big show.
Even one of the reporters of Miss Holland Now had to cancel his invitation as he got a bad cold and he was also waiting to be tested. (the test was negative!)
So we had to watch the finals online as the Miss Holland organization had provided a live stream. The stream could not be seen after the finals as all the material will be used for TV program “Op jacht naar de Kroon” that will be shown on RTL4 later this year.
In the weeks before august 31st the national and international hot picks picked almost all the same girls: Roos Sophie, Sharida and Dominique. But it seemed that the one to beat was Sigrid. She showed up in almost all polls and also impressed us a lot on her social media and the way she communicated with us at our social media channels. So would the favorites make it?
The Miss Nederland organization provided the audience with several acts like: Samantha Steenwijk, Elize, Patricia van Haastrecht and the Dutch Tenors. The artists did a great job as it is not easy to sing for a group of people who are almost all there to cheer for one of the participants and as it was of course not allowed to dance or to sing with the artists.
For the girls there were the rounds that are quite similar to the rounds the Miss Nederland provides us with the last few year: opening, swimwear a dance round and evening wear. During these rounds the girls were interviewed in groups by the host of the evening, the replacement of Rick, Patrick Martens. Patrick Martens did an amazing job as he had learned only on the morning of the final show, that he would host the event. He absolutely tried te make of all interviews a personal one and he gave all the space to the participants to shine on stage.
During these rounds we were surprised by the girls as all did a great interview and no one really stood out in the group of 10. Not during the interview nor during the other rounds.
The panel of judges had some familiar faces who judged the Miss Nederland finals many times like: show director Albert Verlinde, photographer William Rutten and Kristina Bozilovic from Talkies magazine. But also some “new” faces like: Victor Brand, who hosted Miss Nederland a few years ago, Monique Westenburg, and the reigning queen Sharon Pieksma. Head of jury was the owner of the Miss Nederland Organization, Monica van Ee – Hummen.
After all rounds the judges left to have their final meeting to decide who would be crowned Miss Nederland 2020.
We from Miss Holland Now, had absolutely no idea who would win. As we wrote before all girls did a good job and no one stood out. It was still Roos and Sigrid who we believe would make a great Miss Nederland and do very well at the Miss Universe pageant. We were also very impressed by the interviews of Denise and Sanne. When Sanne was selected as one of the 10, she was immediately one of our favorites. But during the weeks of pre-pageant activities she seemed to lose it. During the finals and especially during the interview she showed again why she was a finalist. Denise seemed very relaxed during the interview and was able to tell in a very convincing way about her platform on eating disorders.
We also said goodbye to Sharon Pieksma, Miss Nederland 2019, who did a great job at Miss Universe, and promoting the Miss Nederland brand,  she will be remembered especially for bringing  attention to her advocacy for a plastic free ocean. 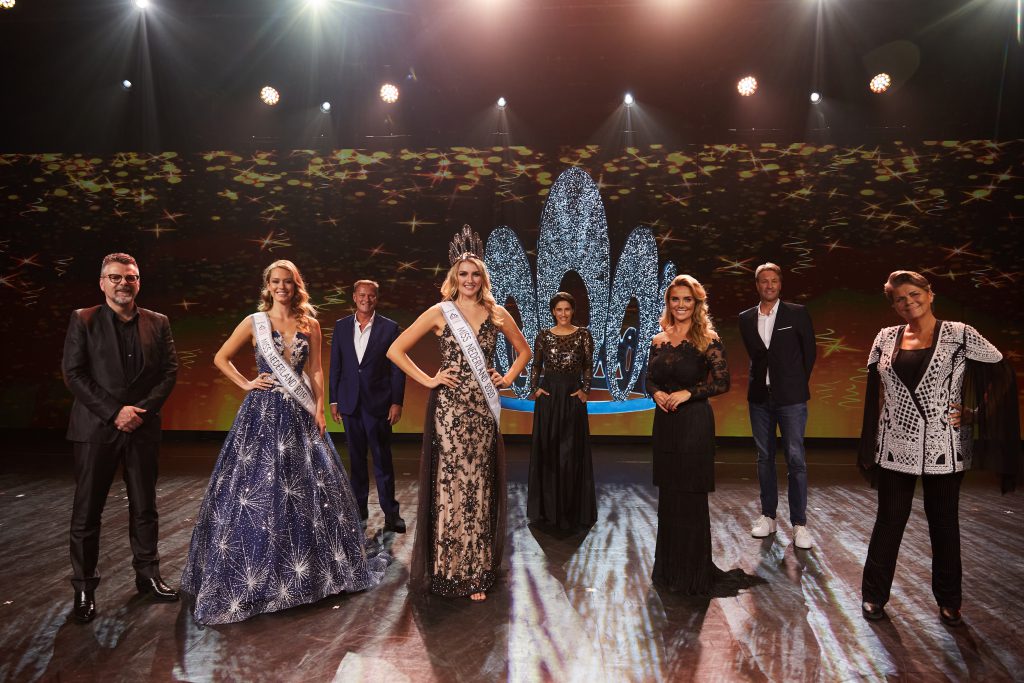 When the judges returned, Patrick and Rahima would first announce the two special awards. the Miss Congeniality award went to Fae Milder and the Miss Social Media sash was put on Sigrid Boersma. Funny detail: Both girls also sang a song during the finals, although there was no talent award.
Time to announce the top 2: Denise Speelman and Sophie Alink. These two were a big surprise to many.
Sophie was in the beginning also one, we considered to do great but like Sanne, it looked like she lost it during the pre-pageant weeks.
Time to announce the winner and who would be better to shout out the name of the new Miss Nederland  than Kim Kötter. We already wondered where Kim was during these finals, but there is Kim! She is no longer CEO of Miss Nederland and pregnant with her third child, but no one can announce a winner like Kim does!
Kim with in her hand the sashes on a pillow shouted in her own way: Denise!!!
All international and national pageant watchers were very surprised with these result, as were we. But as mentioned above, Denise did an excellent job during the interview and no one else really stood out during the other rounds of competition.
We hope Denise will get a very good preparation for the international Miss Universe finals. We already saw that she can handle the interview round very well and we hope her voice will be heard as her message is a great one!