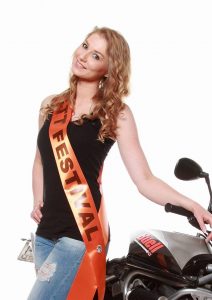 After the succes of Miss TT festival 2015 the organization searched for Miss TT Festival 2016.
After the selection day, 8 girls where chosen to be finalists. During one of the festival nights last week the finals took place next to the Drents Museum. Over 200.000 people visit at least one of the festival nights so the girls had to perform infant of a large amount of people.
The TT races in Assen are the biggest annual sports event  in the Netherlands.
After some rounds it was the beautiful Jeanine de Vries who was crowned Miss TT Festival 2016 with the lovely Bente Vrieling in second position. Both girls also received a wild card for the 12 Months of Beauty event in 2017.