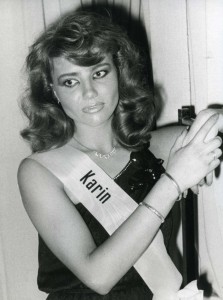 The modern Miss Universe pageant started in 1952 in Miami Beach, Florida. The Netherlands didn’t participate in the first 4 pageants but started to participate in 1956. We will look back to all those beautiful dutch girls who had the honor to represent our country in the most covered beauty pageant in the world.
The 80’s are considered as one of the most successful decades for the dutch beauty queens, also at the Miss Universe pageant. So far the 60’s were the most successful at the Miss Universe pageant with 2 semi-finalists, one finalist and an national costume award. We will start to have a look at the first 5 years of the 80’s.

Before Karin became Miss Holland in 1980, she was Miss Bergen 1979. Like in 1979, Miss Holland only went to the Miss Universe 1980 pageant. The 1980 Miss Universe pageant was held in Seoul, Koreo. Karin was not the typical dutch beauty queen but she made a huge impression in Korea. Like in 1979 the preliminary swimsuit scores were shown during the swimsuit presentation and Karin scored a top 10 placement. Because of that score we can for sure assume that she just missed the semi-finals. 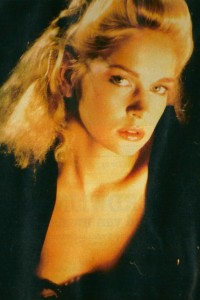 Tall, sexy and very blond Ingrid Schouten won the Miss Holland 1981 competition. She would represent the Netherlands at the Miss Europe pageant and the Miss Universe 1981 pageant.
The Miss Europe pageant became a huge succes for Ingrid or maybe a small dissapointment as she became first runner-up. She just lost the competition to Miss Denmark. Ingrid is he second girl to become 1st runner-up  at the Miss Europe pageant, in 1967 Irene van Campenhout also became 1st runner-up.
At the Miss Universe pageant in New York, USA, Ingrid also made a big impression. Everybody seemed to like the blond bombshell from Zeist, The Netherlands.
During the finals she was called as a semi-finalist but the jury did fail to place Ingrid as a finalist. In the end Miss Venezuela, Irena Saez was crowned as the second Miss Universe from that country. 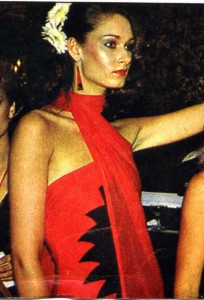 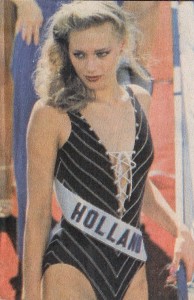 Not only a successful decade but also a decade with many young girls to win the Miss Holland title. Nancy Lalleman was just 18 years old when she won the Miss Holland competition. She had already participated in the Miss Panorama in 1982, when she was just 17 and was one of the favorites to win that pageant.
Nancy was a very busy Miss Holland and went to the most international beauty pageants during her reign. She went to 4 international pageants: Miss World, Miss Young International, Miss Europe and Miss Universe, which was her first international pageant.
Nancy was a favorite among the local press photographers in St Louis, USA. There are some who say that she just missed the Miss Photogenic award. Like in 1982, the european group of contestants was very strong, 8 out of 12 semi-finalists were from Europe and unfortunately Nancy was not among them. Miss New Zealand, Loraine Down, was crowned Miss Universe 1982. 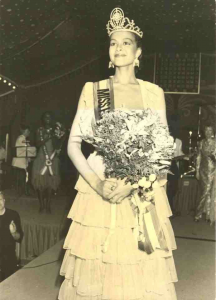 The very exotic Miss Holland 1984, Nancy Neede was one of the favorites for the Miss Universe crown. She was the big hit of the runway as she walked like a topmodel, according to the press. besides that, she won the preliminary swimsuit round by far, her score: 8.500 and the first runner-up, Miss Germany scored “just” 8.245. Many believed she could be the first dutch Miss Universe. So it was absolutely no surprise when she was called as one of the semi-finalists. Her overall preliminary score was 8.345, a 3rd runner-up spot. Unfortunately she just missed the finals by 0.027 points and became 6th runner-up.
Nancy was also a favorite at the Miss World pageant later that year, where she also placed as a semi-finalist. One member of that jury, fashion designer, Oleg Cassini, was very upset about the fact that Miss Holland missed the finals and he asked her to be his model. She was his muse for many years.