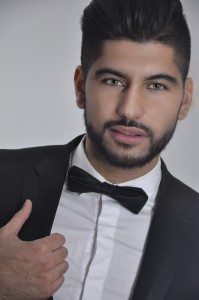 12 Months of Beauty is very proud to introduce to you their first male representative at a international pageant, the handsome and sexy Mister Global Netherlands 2016: Qusay Alobaidi.
Robin and Stefan first saw him at the Miss and Mister Pearl 2013 pageant in Utrecht. Both of them were judges at this event, where Qusay won the Mister Pearl 2013 title.
In 2014 he became a finalist at the first Mister International Netherlands pageant held in Amsterdam.
Qusay just finished his studies and is also the organizer of Fashion Event Amersfoort and the Miss Beauty of Utrecht and Miss Teen of Utrecht pageant.
He will be the first dutch representative of the Netherlands at the Mister Global pageant. The finals will take place in Bangkok Thailand on may 7th 2016.