On january 25th the casting of the dutch candidates for the Mrs. Universe Netherlands took place in the Carlton Ambassador Hotel in The Hague.
After several rounds like: interview, fotoshoot and catwalk, the jury chose 23 finalists, who will be prepared for the finals on may 31st. It is a mix of beauties: brunettes, blondes, tall, short and from different cultural backgrounds.

Besides this, there is much to do for the ladies, like a photo-shoot every month.

This year’s final will be on may 31st, in Opera & Alians in The Hague.
Tickets will soon be available. For more information and for details of the candidates, visit the website www.mrsnetherlandsuniverse2015.nl.
You can also contact Angelica personally via her facebook-page 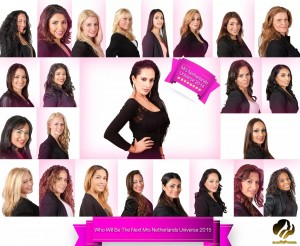