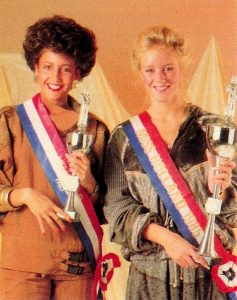 This is a picture from Aktueel magazine from december 1985. It was part of an article about the girl on the left: Bonita Baarda.
When she registered for the Miss Holland 1985 pageant she was not invited for the finals. But when some of the girls decided not to participate anymore, she was asked to enter the pageant. Because she wasn’t selected for the Miss Holland finals at first, she had posed topless for the Miss Panorama 1985 pageant.
At the finals of Miss Holland 1985, she finished at first as 3rd runner-up. The published topless foto was for the Miss Holland committee no reason to disqualify Bonita.
But when Miss Holland 1985, Pasquale Somers (right on the picture), was disqualified because she had posed nude she became 2nd runner-up and a with that she would go to an international pageant.
Bonita was furious when she had to read in a magazine that she was disqualified after al.
Because a judge had decide hat Pasquale Somers could not be disqualified, Bonita became 3rd runner-up again and with that she lost the right to go to an international pageant. So there was no real reason for a lawsuit.
Bonita’s revenge was a nude publication in Aktueel magazine. One year later in 1986, she became 2nd runner-up at the Miss Aktueel pageant. A pageant for glamour models.