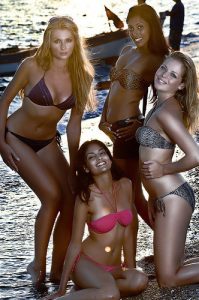 Four beautiful ladies representing the Netherlands at the Miss Benelux 2010 pageant. It was the third time the Miss Benelux pageant was organized by Stephanie Moreel. Although the pageant took place in 2009 the name was Miss Benelux 2010. At this pageant the representatives of Miss Earth Belgium, Netherlands were chosen. Due to a scandal the organization lost its license for the Miss Earth pageant in 2010 and Miss Nederland 2010, Desiree, went to the Miss Earth 2010 pageant and would become the only dutch semi-finalist so far.
The four lovely’s on this picture are: from left to right standing: Yelena Petrova, Salini Gobind and Stephanie Mulder. Sitting on the beac is Kimberley van der Terp. The photo is taken during the pre-pageant activity’s in Turkey, where also the finals took place. Yelena became a top 5 finals and also Miss Photogenic at the pageant. She already participated inMiss Nederland 2007 and in Miss Universe top beauty Netherlands 2008.
Stephanie Mulder would later represent the Netherlands at some pageants and would become a successful photographic model. Kimberley tried her luck at the Miss Benelux pageant at two occasions, in 2008 and 2009. She was also a participant at Miss India Holland 2007 and at the Miss India the Netherlands 2011.
The winner of the Miss Benelux Netherlands pageant was Nathalie den Dekker, who would later represent the Netherlands at many international pageants and would even be Miss Nederland 2012.