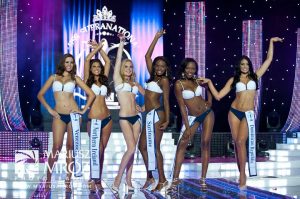 Miss Supranational 2011. In the middle of the picture we see Miss Netherlands, Roline Hund and Miss Suriname, Sharifa Henar. Although both made a lot of impressions on the fans and the organization, but both didn’t get into the semi-finals.
Roline represented the Netherlands at several pageants like Miss International 2010. Sharifa represented Suriname at many pageants and was also a top 12 finalist at Miss Nederland 2010.
The Netherlands will be represented by Milenka Janssen this year at the pageant that will be held in Polen later this year.