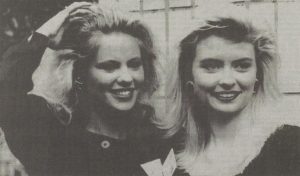 Blond against blond, Miss Holland 1988, Angela Visser and Miss Iceland 1988, Linda Petursdottir pose for the photographers a few days before the finals of Miss World 1988. Miss Iceland would win the pageant, while Angela just missed the top 10. Angela would off course be crowned Miss Universe a few months later in Cancun Mexico.
Many believed that Angela would have made the top 10 at the Miss World 1988 pageant wearing another dress and mabye loosing a few pounds.