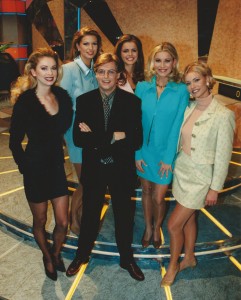 The popular game show from the USA “Weel of Fortune” was called in the Netherlands “Rad van Fortuin”. It was one of the first daily gameshows in the Netherlands and hosted by Hans van der Togt. His first assistant was Leontine, nowadays the wife of famous dutch singer Marco Borsato.
She was succeeded by Patrica Rietveld, who just turned around the letters for two seasons.
On the first of January 1996, the search started for the new “Miss Rad van Fortuin”. There were 5 candidates who each were a one time assistent for Hans. After one week, one of the girls would be the winner and be “Miss Rad van Fortuin” and the new assistant of Hans.
All 5 absolutely beautiful, but from the five girls there were three beauty queens: Miss Nederland 1995, Didi Schackman, who represented the Netherlands at the Miss World 1995 pageant (on the picture she is in the middle). Chantal van Woensel, Miss Universe Netherlands 1995, who represented the Netherlands at the Miss Universe 1995 pageant (on the picture she is second from left). In fact, both girls were at that time still the official titleholders of their title.
Last but also the winner of this pageant, Cindy Pielstroom, who participated in Miss Nederland 1989 and 1990 (on the picture at the right).
The girl second from right is Angela van Hulten, who was at that time the girlfriend of famous soccer player, Patrick Kluivert. The two married in 2000 and divorced 4 years later.
The girl on the left is called Nadya, but we do not know more about here.