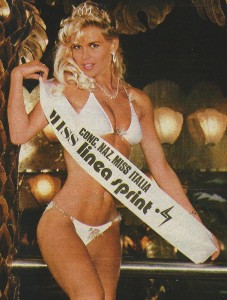 We see a very sexy model wearing the Miss Linea Sprint sash on the picture above.
This picture was published in “Weekend” Magazine in 1980 and was part of an article about Helen Brania. “Helen Brania wants so badly to be a photo model,” says the headline of the article, “Many girls want to a model but only a few are lucky to become one, Helen, blond, tall, good figure thinks she is one of the lucky ones.”.
Helen participated in many national and international pageants. When we read the article is says that she won almost all of them. The first pageant she entered was Miss Pasar Malam, where she placed 2nd. That result made her hunger for more.
In 1979 she won Miss International Dreamgirl in Puerto Rico and Miss Rose Princess in Indianapolis. On a trip to Italy she even participated at the Miss Italia pageant as Miss Cinema Trentino Alto Adige. Off course, she did’t win as she is dutch but she did win a special award at the finals.
On the picture we see her with a title she also won in Italy: Miss Linea Sprint.

Later, in 1984, she tried her luck at the Miss Holland pageant, where she was unplaced………