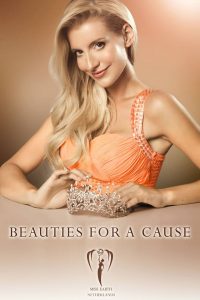 If there is one pageant that changes many times when it comes to national directors it is Miss Earth. The last three years, Robin and Stefan of 12 Months of Beauty were responsible for the dutch candidates for this pageant. But also Kim Kötter, Katia Maes and Stephanie Moreel have been the national director for the last 10 years.
In 2017, Milou Verhoeks took over the license. She was Miss Earth Netherlands in 2007 and is now the big boss of Miss Beauty of the Netherlands.
On this picture we see Wendy Kristy Hoogerbrugge, who was Miss Earth Netherlands 2013. She was also Miss Zuid Holland and a top 6 finalist at the Miss Nederland 2012/2013 pageant.