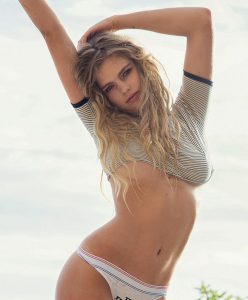 We are a website for and about dutch beauties. So we are also very proud when a dutch girl becomes a playmate in the american edition of Playboy magazine.
The playmate for the month of august 2016 is the lovely Valerie van der Graaf, who is born in Rotterdam. She already graced the pages of magazines like Vogue, Jalouse and the famous swimsuit editor of Sports Illustrated.
Nowadays the US playboy does not show nudity anymore. 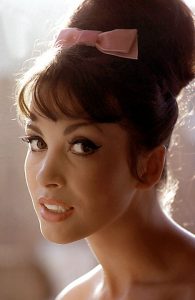 Valerie is the 6th dutch girl to become a playmate in the US playboy.
The first one a was actress and model Astrid Schultz(seen right), who was playmate in the month of september 1964! Exactly 15 years later, in september 1989, there are the twins Karin and Mirjam van Breeschoten who become the second (and third) playmate of the month.
In june 1991 it is Saskia Linssen who becomes playmate of the Month.
The 40th anniversary playmate can be seen in january 1994 and  is the dutch Anne Marie Goddard. Also the 60th anniversary playmate from january 2014 is from the Netherlands: Roos van Montfort.
We are very proud of all these beautiful ladies who are really representing the Netherlands on their own way.