Will she be Miss Grand Netherlands 2017…? Christina Lazaros

Who will she be? There are 8 just incredible woman who participate in te pageant. We will introduce them to you one by one, our second beauty is… 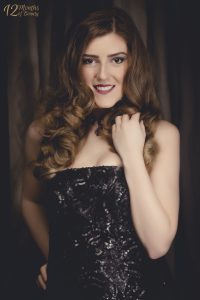 The first time Robin and Stefan of 12 Months of Beauty saw Christina Lazaros on the catwalk was at the Miss Assen 2013 pageant, where the two were judges. Christina won a wild-card for the Miss Drenthe 2013 pageant. But this pageant was cancelled in the end.
But Christina never gave up and entered several pageants and modeling competitions.
In 2016 she was one the 4 finalists for Miss Eco Netherlands 2016 also organized by Robin and Stefan. She didn’t win, but was asked by the international organization to represent Greece at the Miss Eco International 2016 pageant held in Egypt as Christina’s father is from Greece. This was for Christina her first international pageant and she loved every minute of it.
Christina, 21 years old, is a student of International law in Groningen, where she also lives.
She hopes to make a difference when it comes to war and violence. Christina thinks that people should cooperate to reach an utopia, where war and violence ar not being used to gain power.