She was vey young when she won Miss Holland 1983: Nancy Lalleman-Heynis. After she won the pageant she went to 5 international pageants, that makes her the most travelled Miss Holland during her reign: Miss Universe 1983, Miss World 1983, Miss Young International 1983, Miss Benelux 1983 and Miss Europe 1984.

What is she doing now? We are very proud that Nancy took the time to answer 10 questions for us 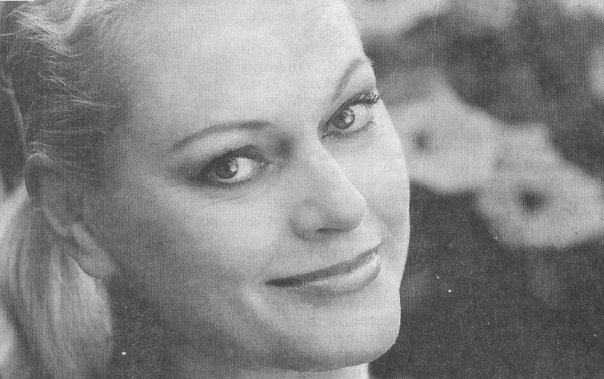 Tell us about Nancy before she was Miss Holland 1983…

Before I was crowned Miss Holland, I was in school at the Zaanlands Lyceum. Born and raised in Zaandam, I had a fantastic childhood with fantastic parents. I was asked to become a model, before becoming Miss Holland, but my parents thought I was too young. On Saturdays I was working in a toyshop, Van Groningen, in Zaandam. I always was a bit of a loner. I had friends but I wasn’t everybody’s friend. I never thought that I was special and wore my father’s shirts to the Zaanlands, not to show my figure. Actually I was pretty insecure. I had a very hip self-assured aunt (Mary) who I loved very much and who was very good with make-up. Because of her, I went to picture myself in a different way and experiment with make-up and fashion.

In 1983 you decided to enter the Miss Holland pageant, why?

What is the most memorable moment of the Miss Holland 1983 pageant and why? Was it all what you expected it to be?

The best thing is the moment when they call out your name as the winner. The finale was a very nice day and evening. With a band on a canal boat crossing through Amsterdam. Everybody looked! The choreographer was Donald Jones en his way he worked was a nice experience. But the proud faces of my father and mother were the most precious of the evening. 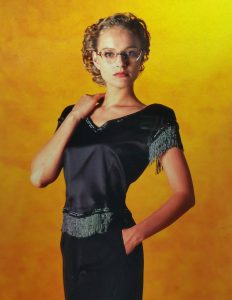 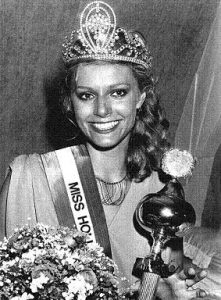 You participated in many international pageants as Miss Holland, tell us about your experiences during the pageants.

It began with Miss Universe. I almost had no time to enjoy my victory for a moment, because right away I had to arrange everything to leave to St. Louis in the USA in a few days. I didn’t even have a passport, so everything was arranged in a rush by the officials. Miss Universe was fantastically organized. I think Trump wasn’t the owner yet … ;-). My roommate was Miss Miss Switzerland, a very nice girl. We stayed for almost a month to prepare for the show and for several PR promotions. There I first heard the album of Michael Jackson, Thriller. Gray turned on our walkman. For the youngsters among us: you put a cassette in… a distant precursor of the iPod. The Miss Holland Organization had not arranged anything for me. My mother made 2 evening gowns in a hurry, sweating in the attic and I scored some dresses in town. Only… at Miss Universe every evening some event was organized where we had to dress in evening gowns. Luckily the committee from Switzerland arranged that she even had 30 dresses with her and every now and then I could lend something from her. That of course was terrible, that was really very bad. Nothing but really nothing was arranged. We had to bring a gift one of the evenings to be auctioned for a good cause. Of course I had nothing with me, so I gave my clogs. Fortunately they brought up a lot of money… That is arranged much better these days… I hope. By the photography jury I was chosen as the 2nd at Miss Photogenic and with the bookmakers I was noticed a lot, but I didn’t get through. To the great sadness of my Little Sister, a sweet little girl who accompanied me during the pageant on stage and at all activities: Clarissa Lim. I am still in contact with her and her little sister Priscilla. They have grown into 2 beautiful adult women.
Besides Miss Universe, I also participated in Miss World in London. It was a very nice time. I have seen a lot, done a lot, and a fantastic show. And there I placed in the finals. It was nerve-wrecking but a great memory, where I am very proud of. Besides these two are pageants I also went to Miss Young International in Korea and Miss Europe in Austria and a small pageant Miss BeNeLux in Belgium. All together great adventure where I learned a lot.

Tell us about Nancy after she was Miss Holland 1983…..

I continued studying and got my HEAO (Business Administration) and went on modeling. I did this for about 11 years. I travelled the world. In Japan, where I worked a lot, I also got a big part in a Japanese movie where Donald Sutherlands and Diane Lane were my co-actors. After all glitter and glamour, I went into the business world and I worked for 4 years at an action marketing agency. We organised the Dutch championship Beach Volleyball in all major cities in the Netherlands. Very hard work, but lots of laughs an I learned a lot: at night filling up the Dam in Amsterdam with sand and building a large beach arena including palmtrees, hammocks and a big stadium for volleyball with adjoining tribunes. A huge stage for shows and performances, for which I was responsible.
After Baker & Clients I went to Berghaus Fashion Group where I managed the sales support team. Besides that I was responsible for th PR and marketing for several labels. A fantastic job where I worked with great pleasure. After Berghaus I went to work at a fashion automatization company. In the past year I did a training in Digital Marketing at DMI in Ireland. 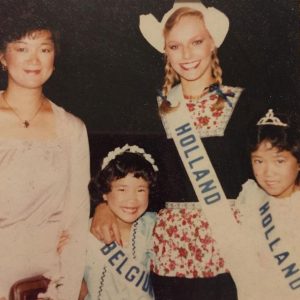 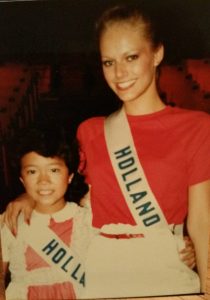 Do you think that your life would have been different if you would not have participated in beauty pageants and how?

Absolutely. I would not have that much knowledge of human nature and of myself. You have to rely on yourself, so you get to know yourself better: Then you have to love yourself. Of course all travels and memories are priceless.

What advise will you give to the young girls who want to be a beauty queen today? And would you stimulate your sons, if they would like to be a model or participate in a male beauty pageant?

Stay yourself above all. Keep on focussing, be wise, don’t solely focus on appearance. Keep your eyes on what is happening around you and enjoy every minute. I wouldn’t push my sons to work as a model, because something like that you should want for yourself very badly. First finish school, because that is the most important. My youngest son is registered at a modeling agency because he wanted that very much, but today you have so many models. I don’t like that any more, but that is a personal thing. Everybody who has worked once already calls themselves a model. Of course that is not so. You should be able to live from this work every month, just like a regular job. So with a few jobs a year, you won’t make it.

Are there things you have learned during your reign, that you did/will take with you for the rest of your life?

Yes, I already mentioned this above. Knowledge of human nature and experiences during travels are priceless. You will notice this when you get older.

If you were a judge in a beauty pageant today. What quality(s) would you look for in a girl and why?

Of course it is a beauty pageant, so she should be beautiful with a very beautiful radiance. Of course it is a personal preference. There will have been people who didn’t think I was beautiful at all, so you should realize that. That’s why it is important not to get frustrated about what people say about you. It is very important that she has the brains and speaks her languages. After all you are the face of the Netherlands during the pageants and you have to face challenges. So you have to stand strong in your pumps.

What’s one thing we shouldn’t forget about Nancy Lalleman and why?

That she would badly like to pass the crown to Nancy Neede, but that tag was made impossible by the Miss Holland Committee, Mrs van Meeuwen. Nancy Neede still is a friend of mine and I think it’s terrible that that didn’t happen then. The Miss Holland Committee didn’t want to give tickets to my parents to witness this, even though they supported me the whole time. I can still get mad about this. Especially because I didn’t get any support from the whole committee. I refused to pass on the crown. So maybe I am the only Miss Holland who never passed the crown, so still is Miss Holland… hahaha 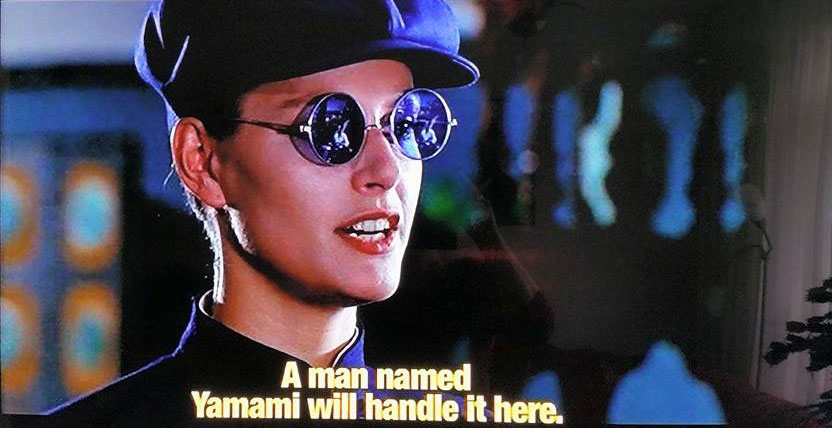 Well Nancy for us you will always be Miss Holland! Thank you so much for this interview and we will follow your career always.

The two kids on the picture with Nancy are Priscilla and Clarissa Lim. Clarissa was Nancy her little sister during the Miss Universe pageant.

last picture is a still from the movie she played in