Beauty of the Past, Historical, Homepage 30 mrt 2018
No comments

The lovely and beautiful Ank Groot was crowned Miss Europe 1973 in january 1974 and when she won she already knew she had give it up in just 5 months as in may 1974, Miss Europe 1974 would be crowned.
Ank was in fact not the official Miss Holland 1973, that was Yildiz de Kat, Ank was “just” first runner-up. But it was not really a secret that the Miss Holland committee preferred Ank and therefore she was send to the Miss Word 1973 pageant at first, where she became not just a semi-finalist but also received the Miss Photogenic award. And the second pageant was the Miss Europe pageant in Kitzbühel, Austria. Miss Holland 1973, Yildiz de Kat, represented the Netherlands at the Miss International 1973 pageant. 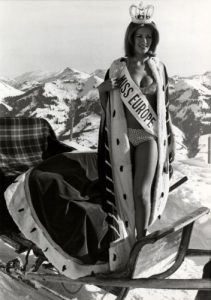 The runner-up in the Miss Europe pageant were in second place: Miss Spain, Amporo Munoz, who would later be crowned Miss Universe 1974 and in third place: Miss Greece, Sicta Vana Papadaki, she would become a semi-finalist at Miss Universe 1974.
After the win of Ank a controversy started in the Netherlands as Yvonne Janssen was crowned Miss Holland Europe 1974. Yvonne would represent the Netherlands at the unofficial Miss Europa pageant in Spain. The Miss Holland committee was not very amused with the titel Yvonne had won and little war started in the Netherlands between the two organizers.