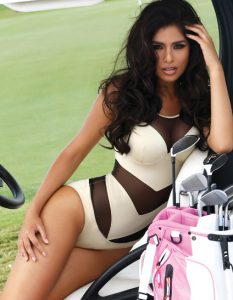 There were several beauty queens that were in the picture to become beauty of the Month this month. After some discussion it was yasmin Verheijen, Miss Universe Nederland 2014 who is Beauty of the Month, may 2016
Yasmin was a newcomer in the world of beauty pageants in 2013 when she entered the Miss Nederland pageant. She won the honor to represent the Netherlands at the Miss Universe 2014 pageant.
Yasmin her performance at the Miss Universe pageant was one to remember for the Netherlands when she was placed 3rd runner-up. The last time the Netherlands placed as a finalist was back in 1992 when Vivian Jansen became also 3rd runner-up at the pageant. In fact Yasmin was just the 5th dutch girl to become a finalist at the pageant (1965, 1989, 1991, 1992 and 2015)
Yasmin is working nowadays in fashion. Last month, she launched her own label “Yverin”. Funny detail is that she studied interior design.
Funny detail: The model for her online shop is her friend and Miss Nederland 2016, Jessie Jazz Vuijk.
She is also seen in the dutch gossip magazines, as she is in a relation with dutch soccer player Khalid Boulahrouz.

for more information on Yasmin her label, go to: www.yverin.com