Every big pageant in the world has off course the famous National Costume parade. The idea is to show the world a  little about your country’s culture, wearing a traditional costume or a fantasy costume designed specially for the pageant.
In the history we see that the national costumes from the Netherlands have never been as sexy as the costumes from for example the latin countries. Nowadays the dutch costumes are not as traditional as they used to be and are more modern and even sexy sometimes. Soon more about the dutch national costumes in the pageant history.

In 1986 the national costume parade at the Miss World pageant made the headlines in the Netherlands.

Tumult because of national costume of Miss USA 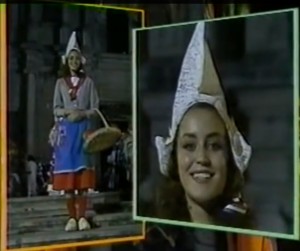 Halle Berry, the 20 years old Miss USA caused a lof of fuss yesterday when she appeared in a bikini dotted with shiny stars at the lunch where the participants of the Miss World pageant had to show their national costume. Masters of ceremony, Peter Marshall, declared he had never seen such a revealing costume during the 6 years he is involved in the Miss World pageant. Berry appeared in a „Star Wars” bikini applied with shiny stars. She said the design was inspired by the American successes in space. Other contestants reacted furious on Berry’s bold appearance. We think it is very unfair, said the indignant Janny Tervelde, the 17 year old Miss Holland. I am fully packed wearing the dutch national costume with wooden shoes. Her costume is the complete opposite and very sexy. One of the other contestants who asked not to be named agreed with Miss Holland. We had to wear our national costume and then she comes up wearing almost nothing. Berry said her costume had to catch the eye from the start. We haven’t won the pageant in 13 years and the designers insisted on winning this year. I will wear whatever they want me to wear….