This year where we have to deal with several terroristic attacks in Europe and the rest of the world. We will go back to some tragic events in the history that had their influence on the world and of the world of beauty pageants. This article is about 1970.

In 1970 it was the 20th time a Miss World would be crowned. It is one of the most controversial finals ever in the history of the Miss World pageant. Before and during the finals of the contest, there were 2 protests against the pageant that took place on november, 20th.
One of these protests, is almost forgotten, but would make the headlines in modern society. On the morning at 02.30 on that day in november a small bomb which had been placed under one of the BBC lorry’s that was parked outside the Royal Albert Hall, the venue for the Miss World finals, exploded. A group of 4 or 5 youngsters that ran away after the explosion, had been seen by a witness. There were some small articles about this incident in the newspapers, but not as big as another protest: The women’s liberation demonstration. 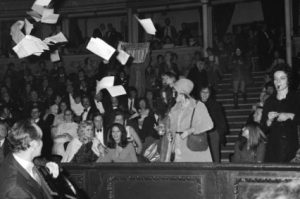 The Miss World pageant was very populair in those days. In the UK, 24 million people watched the finals on television, making it the highest rated television programme that year. During the finals, live on television, about 50 women and some men started throwing flour bombs and ink bombs at the stage. With the bombs the angry women and men threw leaflets saying: “We are not beautiful, we are not ugly, we are angry.“. At that time, comedian Bob Hope was doing a show and he ran off the stage. Mr Hope was just stopped on time by Julia Morley and she convinced him after the police had restored the peace in the Hall to go back and finish his show. He stated: “These things can’t go on much longer. They’re going to have to get paid off sooner or later. Someone upstairs will see to that. Anybody who wants to interrupt something as beautiful as this, must be on some kind of dope.”.
Although the bombing was not the first one of these angry people: they already started in 1968 with bombing the Spanish embassy and the American Officers Club, the words on the cards they used at the Miss World protest probably created their name: The Angry Brigade. This name was first used after the machine gun attack on the Spanish embassy on december 4th 1970, two weeks after the Miss World finals. Many more attacks and bombing would follow.
The Angry Brigade’s campaign ended after a trail in 1972. 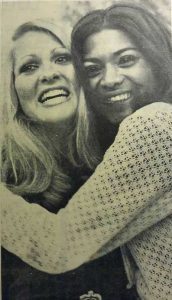 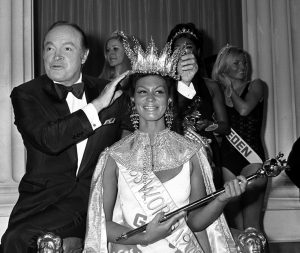 Another controversy was, when Jennifer Hosten, from Grenada, was crowned Miss World. The controversy had nothing to do with the fact that she was the first black women to be crowned Miss World. It had to do with the fact that one of  the judges was the prime minister of Grenada, could he have influenced the other judges? Miss Jennifer only managed to get two first places from the judges while Miss Sweden, Maj Johansson, got 4 first places. Eric Morley later explained that, not only the first places are counted but that overall Miss Grenada was rated higher. Miss Sweden just managed to become 3rd runner-up. And yet another protest started as the audience shouted for Miss Sweden to be crowned Miss World 1970. Could it also have been that the Miss World organization was a bit upset of Miss Sweden’s statement a few days before the finals: “I don’t even want to win. I was warned the contest was like a cattle market and I’m inclined to agree. I feel just like a puppet.”.
Julie Morley, resigned as organizing director of Miss World, 4 days after the finals. The press gave her a hard time after the finals and her explanation about the voting. Although Julia told the press that nothing strange happened involving the voting, she decided to quit. But being the wife of the Eric Morley, she was reinstalled after 4 days.