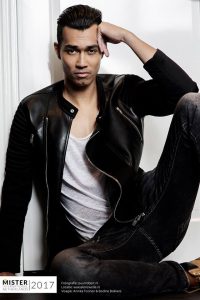 The first thing Lyron Martina, the organizer of Mister International Netherlands, asked us: You will be here next year? That will be the fifth anniversary for Mister International Netherlands and you have been a guest at all the finals so far. In the car on our way to Arnhem, where the finals took place, we already were talking about that.
But first things come first, so we witnessed the 2017 edition of Mister International Netherlands. Like last year the finals were hosted in Arnhem, in the Eusibius Church. This church is nowadays a room for events and is an absolutely beautiful location for the pageant. Like last year, the pageant was in cooperation with the Arnhem Fashion night. While in 2016 there were two events on two different evenings, for the 2017 edition both events were on the same night.
For those who just came to cheer for one of the candidates the 3 fashion shows were not very interesting and made the evening probably a little bid stodgy. Like one of the hosts said towards the end: I feel the energy is very low at the moment.
Both events were hosted by Supermodel Netherlands 2016 and Miss Supranational Netherlands 2013, Leila Aigbedion and for the fourth time: Ryan Haripersad.
The boys had to show themselves in three rounds: Fashion round, Swimwear round and Gala round with a question. Like many pageants the questions showed how  nervous the contestants were. One of the hot favorites for the title: Souhail Tahri didn’t understand the question and decided not to answer. Fortunately he made the next round and when his name was announced he told the jury and the audience that due to his nerves he completely blacked out. We are not sure if this was the reason why he didn’t win. He was one of the big favorites to come in first. Some of the other pre-pageant favorites were: Danish Malik, Mike Peters, Mert Turan and Joost Janssen. Joost Janssen seemed very nervous and forgot to smile a lot of times. Mike Peters has a lot of fans in the Philippines  and that made hem very confident. 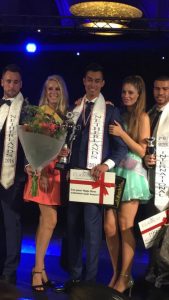 During the finals we saw three men, who were not among the pre-favorites grow into the pageant: Guijberli van Thuijl, just 18 years old, showed the whole audience how much fun one can have on the stage. He was smiling the whole time and looked very happy. He told us, that you shouldn’t be the same, but be different because we all are! So when he made the top 8, everybody was so happy for him. The one with the biggest and loudest audience was Roel van der Bas. This 25 years old nurse was really becoming stronger and stronger during the whole evening and it looked that he could get it all. He was very proud of himself especially as he really had accepted himself they way he is! Very honest, very tall and also a great finalist was the eventual winner of the evening: Jeremy Lensink. He is 25 years old and he lives in Arnhem. He couldn’t believe his ears when he won the first special award that made him automatically a top 8 finalist: the Best Body Award. His radiant performance made him more and more one of those to watch during this evening.
After the 3 rounds of competitions, 8 went on to answer the last question of the evening: Why should you be Mister International. All of the pre-favorites made the top 8 but were accompanied by the 3 mentioned above.
The climax of the evening was of course when the top 5 were announced and immediately the results. For many it was no surprise to see that the last two standing were: Roel and Jeremy. Both had made the evening theirs and both would make a fabulous Mister International Netherlands 2017. But only one can win and that was Jeremy Lensink.
The evening already had become night, but ended very well and this year not one of the other candidates had left the finals before the end, like some did last year.
Jeremy will represent the Netherlands at the Mister International 2017 pageant in december.

Lyron, congratulations with again a great show and of course, we will be there in 2018!

We will see much more of Jeremy, we wish him all the best of luck.