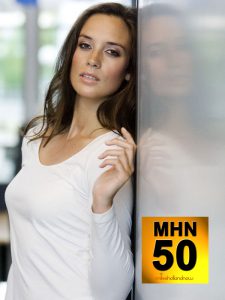 She is the first MHN 50 nominee that didn’t represent the Netherlands at an international pageant, Jana Voyvodich.
Jana made a huge impression at the Miss Nederland 2010 pageant and was runner-up to Desiree van den Berg, who won the pageant.
One year later she tried her luck again in a beauty pageant, but was again first runner-up at the Miss Noord Holland 2011 pageant.
Jana, who never dreamed being a model was scouted one day and asked to become a model. When she noticed that her body changed and she could got not meet with the requirements, she dropped out of modeling and start studying.
Later she learned that there was for sure room for models with the physics she has.
Jana became a populair plussize model and even with our asking for it she became part of the “Body Positivity Movement”.
She can be seen in many fashions shoots but also in interviews in many magazines printed and online.
We are proud to say that Jana has made the top 150 for the MHN 50.