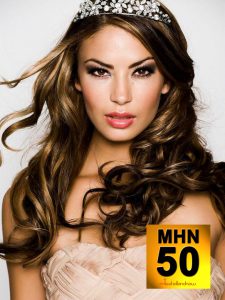 In 2 weeks we will give you the 150 names of those who are nominated for the MHN50.
The 14th name on that list is that of Avalon-Chanel Weijzig, Miss Nederland 2009. According to many one of the most beautiful dutch queens ever.
It was Avalon her first ever pageant, the Miss Universe Netherlands 2009 pageant. And for some the first one is just the one they win! Avalon won the crown and went to the Bahamas to represent the Netherlands at the Miss Universe 2009 pageant. She was an instant favorite of many pageant watchers and there were many who believed Avalon could be the second dutch Miss Universe. Unfortunately she missed the semi’s, probably jus!
After Kim Kötter also became the franchise holder for the Miss World pageant and she became the CEO of the Miss Nederland pageant, Avalon was of course the right choice to become Miss Nederland and she represent the Netherlands at the Miss World pageant in South Africa.
The last pageant for Avalon was the Miss WM in Germany in 2010, all countries of the World Cup soccer compete in this pageant and Avalon became 2nd runner-up.
Nowadays the still very beautiful Avalon world all over the world as a successful model.
A great nominee for the MHN50.