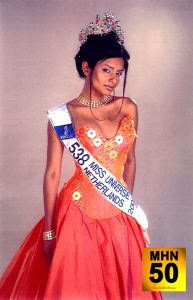 Back in 2001, she was a big favorite among the fans of the Miss Universe pageant: Miss Universe Netherlands 2001, Reshma Roopram.
It was not the first time she tried to represent the Netherlands at one of grand slam pageants, in 2001 she was first runner-up at the Miss Nederland pageant for the Miss World pageant.
Beautiful Reshma didn’t place at the Miss Universe pageant but she made the news as she was asked by her boyfriend to marry him.
Reshma was a popular fotomodel for several magazines in the Netherlands in those days. But nowadays she is very well known as the beautiful politician and alderman for the PVDA in municipality of Barendrecht.
Funny detail, in 2001 she was first runner-up to Raja Moussaoui, who also became a local politician and alderman in the municipality of Roermond for the right wing as Reshma did for the left wing.
Reshma was and still is beautiful from the outside and the inside and so we are very proud to nominate her for the MHN50.