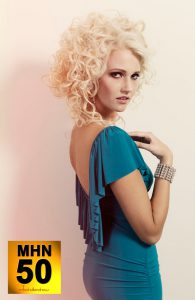 She represented the Netherlands at the Miss Grand International 2013 (top 20), Miss Earth 2014, Miss ECO 2015 (1st ru), World Supermodel 2015 (1st ru) and she won Miss Global City Queen 2015. Off course the queen we are talking about is Talisa Wolters.
Talisa her first pageant was the Miss Overijssel pageant in 2012, when she didn’t make the finals but that didn’t stop her to participate. Her second pageant was the Miss Supranational Netherlands 2013 where she was crowned the first Miss Grand Netherlands ever. At the international pageant she was really popular among the Thai fans.
After that many national and international pageants followed. She is a real veteran in the dutch pageant world.
Nowadays she is working as a real estate broker but she is also closely related to every 12 Months of Beauty pageant in the Netherlands.
Talisa is our 15th nominee for the MHN50.