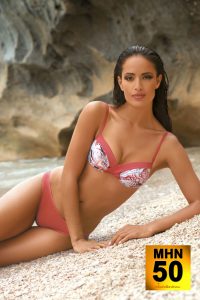 Celina Manahutu is the daughter of Jacqueline Boertien, who represented the Netherlands at the Miss International 1980 pageant.
She didn’t win the Miss Nederland 2002 pageant, in fact, she didn’t even make the top 3. But Celina became a very successful model for brands like Marc & Andre swimwear and Buffalo Swim.
In the Netherlands she became the face of 538, a radio station in the Netherlands and she graced the cd’s of that station. She also was part of a girlband for 4years.
After a decade of modeling, posing and singing she decided to do what she always wanted to do.

In her biography  we read:
In the beginning of 2011 she started her DJ career and she already performed in lots of night/beach clubs such as : Ibiza Blue Marlin, Barcelona Hotel W, Delanos, Paradiso,and many more.
Chelina Manuhutu has created a sound of her own. With groovy house, techhouse music with a lot of african, latin drums. She wants to give people a great feeling and make them enjoy it by making and playing new and exciting music. Now she wants to spend a lot of time in the studio making her own tracks and work with other dj’s and artists.

Celina is a top contender for our MHN50.