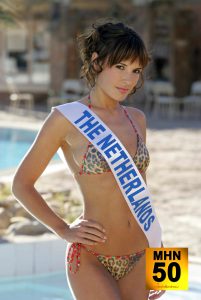 Always a favorite of us the next nominee for the MHN50: Miss Universe Netherlands 2003, Tessa Brix.
The first time we noticed this lovely woman was in 2002, when she tried for the first time to represent the Netherlands at the Miss Universe pageant but she didn’t make it that year.
The year that followed, 2003, she tried again and she won! She did an absolutely great job in Panama where the Miss Universe finals took place. Especially at the swimwear preliminary she showed the universe her great and fit body.
Although she didn’t make the cut she was asked by the Miss Nederland organization to represent the Netherlands at the Miss Europe 2005 pageant in Paris France. Again she did a great job and was radiant at all the pictures that were in the media.
Beautiful from the inside and the outside she proved that a beauty queen can also be a successful model. Until today she can be seen in magazines and on television doing all kind of commercials and fashion shoots.
Tessa is such a friendly beauty queen who always is so positive and every time we ask her something as he always takes the time to answer and to help us.
A great nominee for the MHN50!