In 1952 Miss Holland, Elisabeth van Proosdij, was not allowed to go to the Miss World pageant as she got married during her reign as Miss Holland 1951/1952.
In 1966 however Anneke Geerts, who was 3rd runner-up at the Miss Holland 1966 pageant, went to the Miss World pageant in London while she just got married.
She was asked to keep it a secret but on november 8th 1966 the dutch newspaper ” de Telegraaf” published an article in which she revealed that she was married before leaving for Miss World.

Here is the translation of the article, which was written by famous gossip reporter and later married to Monica Strottman, who represented the Netherlands at the Miss World 1971 and the Miss International 1972 pageant, Henk van der Meyden.

The secret marriage of Miss Anneke 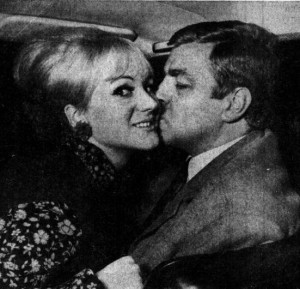 The biggest secret of Anneke Geerts, who wil represent the Netherlands this week at the Miss World pageant in Londen, is that she is a married woman… Because beauty queens are no wives and officially it is not allowed for a Miss World to have a husband. Nevertheless Anneke Geerts will take the plane to Londen.

She told me yesterday evening: “3 months ago I married but I didn’t give any publicity to the marriage. Mr Broerse, who organizes the Miss World pageant, preferred that my marriage was postponed for 3 months, after the Miss World finals. But I couldn’t do anything about that, we had to get married because of a house which we could get, and I didn’t want to let it go. Besides that I think a marriage is more important than a beauty pageant”.

This Week to the Miss World pageant

Her husband, Rinus Groeveur, technical advisor at a plastics firm said: “We thought at the time that Anneke would not be sent anymore, but a while ago Anneke was called again by Piet Broerse with the request if she still wanted to go and that’s what she decided. We were asked not to give any publicity to the marriage…”.

I have to say that Anneke tried this. At first she told us yesterday afternoon that she was going to get married this year, but after a talk with her husband she revealed that the marriage already took place.

“I am very relieved that I have told the truth”, she said, “and I believe there have been more married beauty queens. People don’t like it because one is not really a “miss” anymore, once married. But after all, mr. Broerse has arranged everything and I am very glad that I am married. My husband Rinus and I are very happy and the Miss World pageant will be my last pageant; a pageant is off course baloney and very unimportant. I do this because it is the first time that I will go to Londen and hopefully I have some great days, because they will take good care of us. I will have a chaperone”, and she asks: “What will that lady do the whole day, she will not stay with me the whole time?”. 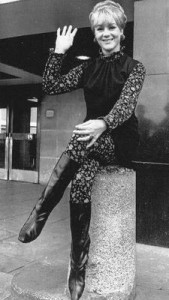 Anneke Geerts has some experience with beauty pageants. In fact she is a professional beauty queen.
She was Miss Garda-Lake, she was 1st runner-up at a Tourist pageant in Italy, 3rd runner-up at the Miss Holland (red. 1966) pageant and ze was called Miss Zandvoort (red.1965).

I asked her if being a beauty queen gives her some self-satisfaction.
“No” she said, “In fact, you don’t do anything, I would like to do something else. I was one an assistant in at a television show “Het Gulden Schot” but the only thing I had to do was handing out some things, thats not much.
But what I really want to do, I don’t know exactly. For now I will be a freelance photo model and world as a mannequin, that I can combine with being a housewife”.

The upcoming Miss World pageant raises some worries for Anneke. You don’t only have to parade in a bathing suit but also in evening gown and cocktail dress. Also I got a complete traditional costume from Volendam, but the wooden shoes I had to buy myself has been told, I will choose them tomorrow. They want all participants to parade in a national costume. It will be quite a walk. I will return on my knees.
Isn’t she afraid to walk in a bathing suit in front of a serious looking male jury?
She laughs and says: “On the beach men also watch you? And if I’m in a fashion show people also watch with big eyes, you get used to that.”
Anneke doesn’t count on winning the main price. “There are nicer girls than me”, she says modestly, “because I don’t think I am that beautiful. But with these pageants it all depends what the men in the jury like. If they prefer a blond or dark girl, I have to wait for that.”
The largest problem besides her secret marriage is her height.

“Most of the other girls are very tall and that is very important, because they are looking if you have long legs.
I think I am rather petit. I am only 1.66m.” and while laughing: “I always tell that I am 1.68m, that sounds better. But up to now I always was the smallest girl… But I will see how it goes, in London, I will not be nervous. I had a great time, also at the pageants in Italy. The men were always obtrusive, but if they noticed that you are married or engaged, they leave you alone.”

Totally on her own- my husband has to work unfortunately- Anneke Geerts, who now is Mrs Groeveur will travel to London. „I am not afraid of anything, I only hope that I will not trip on my long dress, because I have never worn one before and I had one made especially for this pageant.