picture of the week 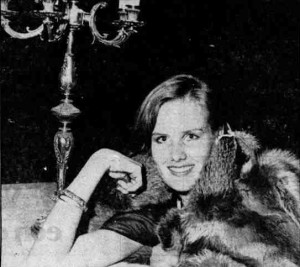 Caroline Hooft, just after the Miss Holland 1977 finals. She was just 16 years old at that time and did not only became 2nd runner-up, but also Miss Young Holland 1977. She represented the Netherlands at the Miss Young International, where she was a semi-finalist and also at he Miss Europe 1977 pageant. The pageant was won by the beautiful Ineke Berends.
People were very impressed by Caroline, some even compered her to a young Grace Kelly.
The fur coat she is wearing was her price, something that would not be tolerated nowadays in theNetherlands.