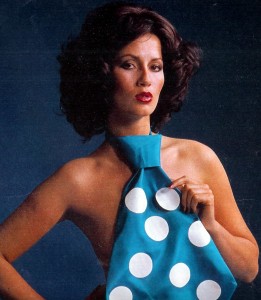 Miss Holland 1970, Maureen Renzen became after her reign as Miss Holland 1970 a populair model for magazines like Penthouse, Playboy and Lui. Maureen was a popular pet of the month (the name of girl of the month for Penthouse magazine) for Penthouse as she did a lot of promotional work for the magazine in 1971.
She also played small parts in the dutch movies, Frank and Eva (1973) and Grijpstra and the Gier (1979). She was also in the 1971 documentary, the anatomy of a pin-up.
In the 80’s she owned her own modeling agency and she judged many beauty pageants.
The picture we show this week is from the dutch magazine Panorama. The magazine was famous for its pin-up foto’s in the 70’s and 80’s.