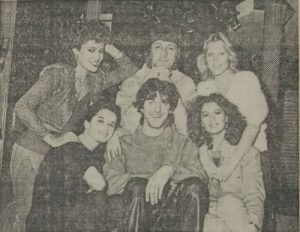 This is the group Music Hall. The group participated in the national song contest in 1983. They sang two songs: ” Voulez-vous Danser” and “Stop die Show”. They did’t win but ended as number 3 and 4. Both songs were written by Peter Koelewijn who also was also the producer of the group.
On the pic of this week we see the 6 members of the group, but on the national finals there were only 5. It was Shirley Mescher (in front on the right) who had to leave the group as she became pregnant with Melissa Sneekes (Miss Nederland 2007). Shirley participated in the Miss Holland 1981 pageant, where she was a finalist. After that pageant she participated in many national and international pageants.
She would become a famous glamour model in the late 80’s and used the name Shirley Jane Mercier.