Beauty of the Past, Historical, Homepage, Queens in Zines 10 apr 2020
No comments

Welcome to our new item on Miss Holland Now, Queens in Zines.
We will highlight articles from magazines about dutch pageantry from the present and the past.
We translate the articles, if they are not in English

Today we start with an article from the French magazine Écho de la Mode.
They highlighted 6 of the participants of  Miss Europe 1970, including the beautiful Stéphanie Flatow, who represented The Netherlands and became 3rd RU.
Stéphanie also participated in Miss Holland in 1970 (1st RU) and 1976 (2nd RU), and she represented The Netherlands at Miss World 1976, where she placed 5th RU. 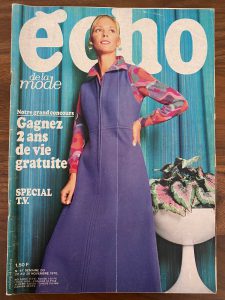 Among them
Mannequins
Secretaries
Students …

It’s not enough for them to be beautiful.
They understand that they have to prove that they are intelligent and cultured.
They stride for the title of “Miss” to make it in the film business or marry well.
They dream of traveling and a steady job.
Previously they wanted to pursue a cinematographic career.
The title of “Miss” often opened doors at studios, and you could count on all fingers of a hand Italian “Beauty Queens” who we remember from beauty pageants.
Such was the case of Gina Lollobrigida, Sophia Loren, Lucia Bose, wife of the celebrity Spanish matador Dominguin, Sylvana Mangano, Silvana Pampanini.
We discover many more names in the lists of the international cinema, though these famous names we often lost interest in this episode of their career, it is later on that they admit that fact to themselves, and what gave a lot, if not all, are the physical qualities and being exceptional photogenic.
Like a Sophia Loren or an Anita Eckberg (who was Miss Sweden), how many hundreds of young girls want to be the queen on a summer night, in the Palavas des Flots, or on a winter night in the town hall of the XVth Arrondissement?
Do we have again in 1970 good reasons to go for a “Miss” title, when there are pretty girls and those who have a bit of lead in their brains?
It is the question if we pose ourselves.
During two weeks, on the luminous decor of Greece, our sponsors were witnesses, discreet and attentive, of the adventures of the competition in which twenty candidates competed for the title of Miss Europe.
You will, on the next pages, get to know six of them. 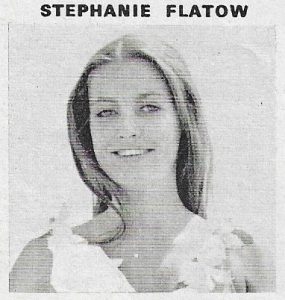 Stéphanie Flatow, Miss Holland, is seventeen years old. She stands 1.72m; she is very beautiful and she has big green eyes. She is the Benjamin of the group.
At the moment she is preparing for her exams which are similar to our French Baccalaureát. Her family lives in Rotterdam, where her father is a cigarette producer.
When we asked her if her parents looked at her having a “career” as Miss with reluctance, she responded:
-Why? They trust me!
Very sportive, she has with her seven victories in “junior” tennis tournaments. Her two idols are dutch tennis champion Tom Okker and jazz pianist Oscar Peterson.
She came to Greece with a mini wardrobe, which surprised the other beauty queens:
Two small beach dresses, a cocktail set, two evening gowns and of course one swimsuit.
The jury chose her as a runner up for Miss Europe. Her wish? Pursuing her studies as long as possible. 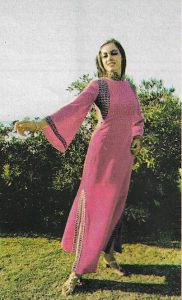 Stéphanie from Holland is dressed by the greek couturier Yannis Travassaros. This splendid evening dress with a split in the skirt and pagoda sleeves is embroidered with gold.