Queens in Zines, the 12 Miss Universe Netherlands 1991 candidates in Veronica

Sometimes an article is not about 1 queen. This time we have 12 queens representing the 12 provinces of the Netherlands at Miss Universe Netherlands 1991.
This was also the first time the representative of The Netherlands would wear NETHERLANDS on her sash.
It was also the first time that TV station Veronica was organizing Miss Universe Netherlands and broadcasted the pageant. This article was an announcement in their TV guide, which was not only a guide, but also contained background articles about TV programs of that week.
Of course we see many faces we have seen before in dutch pageantry.

This article actually is more about the public voting system of that time, which makes it interesting. 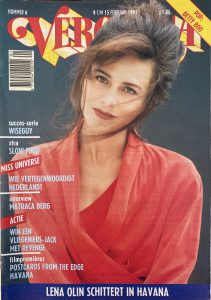 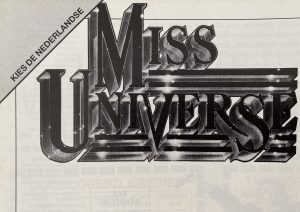 “At first we were dead nervous, but now we are very happy that we participated and we were chosen. The audition was quite easy. The organization of Veronica was perfect …”. One relieved and enthusiastic reaction of the twelve finalists, who in the end will stride for the ticket, which will bring one of them to the Miss Universe pageant in Japan. The readers of the Veronica magazine and Story will decide on coming February 21st, which dutch beauty queen will go to the Far East…

THESE ARE THE PRIZES 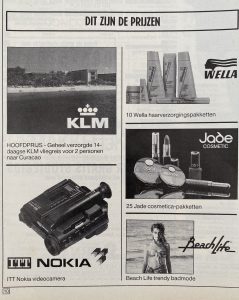 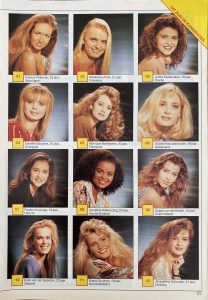 Ten girls per dutch province were invited to Hilversum to decide which twelve eventually would go to the Dutch finals. In total there were 5.000 reactions to our calling’s the Veronica magazine and the Story for the election of the dutch beauty queen who will go to Japan and perhaps will follow Angela Visser, the dutch beauty who won the title “Miss Universe” in 1989. At the selection it was not only about external beauty. Character and general knowledge were firmly tested. In the coming weeks there will be television recordings of the twelve finalists, probably abroad. The viewer will get a good impression of the girls. This is all done to make the decision as easy as possible.

This is how to make the choice
The twelve participating beauty queens are being introduced on these pages. There are two ways to participate to choose the dutch representative for the Miss Universe pageant. You, the viewer, can make your choice known by telephone. Or you can choose for the reply coupon which you can find on this page. Your reply coupon has to be with us before February 20th 1991. Up to February 21st you can also make your choice by telephone. The viewer chooses the number 06-34035010 (50 cents per minute). The voice of Alfred Lagarde will tell the caller what options there are. You can simply make your choice by keying in the participants number of the candidate of your choice, 01, 02 etc. Would you like more information about the candidates, Alfred will tell you which number you have to key in thereafter. You will hear the voice of the candidate of your choice immediately. The telephone number will NOT appear on your television screen. Keep your Veronica Guide close at hand. By participating in the voting, you will make chance to win many wonderful prizes. The Grand Finale will be braodcasted on February 21st 1991, directly from the Sonesta Hotel in Amsterdam.