Beauty of the Past, Homepage, Queens in Zines 02 mei 2020
No comments

De Telegraaf is one of the biggest newspapers in The Netherlands. They have often been and still reporting on beauty pageants.The Telegraaf, de Courant, has had special additions to the newspapers. We found an addition about Twente, which is part of The Netherlands, situated in the province of Overijssel. There are some dutch beauty queens from this region, like Kim Kötter, Miss Universe Netherlands 2002, Talisa Wolters, Miss Grand Netherlands 2013 and Miss Earth Netherlands 2014, Rachel van der Meulen, Miss International Netherlands 2015, and Lotte van der Zee, Miss Teenager 2017.
The year of the article, the Telegraaf was the host of Miss Holland. 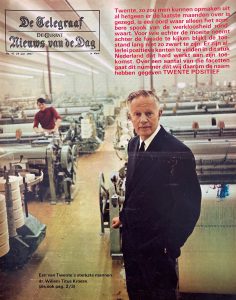 The Telegraph
The Newspaper
News of the day

(Text on the cover)
Twente, and this is what is said about it the last months, is a place where only the gloomy ghost of unemployment is wandering about. For those who bother to take a look behind this facade, it doesn’t seem that dark by any means. There are many positive sides to find in this part of The Netherlands that work hard on it’s future. This issue is about some of these aspects and we therefor named this issue TWENTE POSITIEF

Except for a lot different things, Twente got the reputation to deliver so many beautiful girls.
Judge yourself. 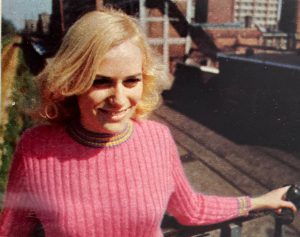 YVONNE MAEYER (20) is an assistant for advertisement, even in a textile company, and even in Enschede. At a recent beauty pageant, she became “Miss Overijssel” and that makes her dream more about a career as a photographic model. “For that you have to be in Amsterdam”, she worries. ” It would not be that strange to leave, because in a city like Enschede you get bored.” 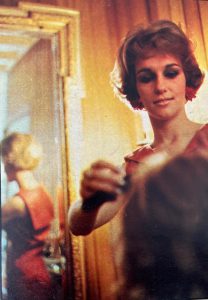 YVONNE VAN REES (23), hairdresser in Hengelo, was second at the last beauty pageant for the “Miss Overijssel” title.
She cannot be sad about it.
Yes, she is engaged.
No, she does not want to leave Twente for now.
And yes, she wants to stay a hairdresser.

These are 2 of the 3 girls in the article.
Both girls did participate in Miss Holland 1967, but didn’t place.