The Grand Slams: The Supranational Brand

When we started Miss Holland Now, we were the first beauty pageant platform in The Netherlands, where you could find information about current and past dutch pageants and news about pageantry in The Netherlands and in the world.
Because news is going so fast, due to social media, our website changed into a medium of background information, historical facts and interviews.
More and more our 10 Questions are not just for current queens and kings, but we want to add depth with interviewing queens and kings from the rich dutch pageant history.
In the past many queens were seen in magazines and on TV, we can call them the social media of those times. In Queens in Zines we give you a glimpse of that media.
And don’t forget our popular #MHN50 which is a tribute to queens from the present and past.

Mister Lipinski was already a national director for Poland for several international pageants and felt a gap in the pageant industry:

If girls would not advance in a pageant, you would see them on stage only for a few moments, so Mr Lipinski decided to start his own competition with a format that would allow all of the country representatives to be seen as much as possible.

Mr Lipinksi came across this term, reading a financial magazine and he was fascinated by it, also because it was not commonly known.

Supranational means involving more than one country, a group of countries that come together and has a higher power. It’s about being united as a group.

The #suprafamily brings together young people from all over the world to celebrate their beauty, but also the beauty of their aspirations, dreams and the power that lies within them.

When they come together, they are not defined by their nationalities, cultures, religions or the languages they speak. As human beings, we are far more similar than we are different.

In fact, as they share their stories, dreams and ideas with others, they quickly realize that they are actually a group of like-minded young people who all share the commonalities of wanting to achieve their goals and live successful and happy lives. Many of them use this also to be an inspiration for others to do the same.

The Miss Supranational final show is on air in close to 150 countries as a television show.

The winners stay part of the #suprafamily forever and they keep on coming back, just like the rest of the contestants.

The winner of Miss Supranational is traveling more and more each year, to several countries to promote the Supranational brand, and the pageant is therefor gaining weight in the international pageant world, like in 2019 when Miss Supranational 2018, Valeria Vazquez, visited The Netherlands during her European tour. 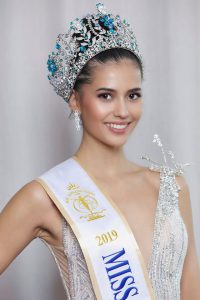 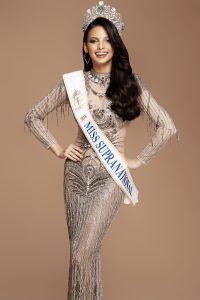 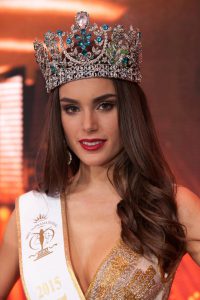 Who is a Miss Supranational?

A young woman who is not only beautiful, but has a vibrant personality, someone who is humble and hard working, and has the desire to be an ambassador for the brand Supranational.

Miss Supranational must have a heart for the people and not only use the title for herself, but also to inspire and help others. They create their own platform to make a difference in their own communities and interests.

In 2016 Nowa Scena, who are the organizers of Miss Supranational, started a new chapter by having a male pageant alongside their already successful female pageants.

The Mister Supranational aims to revolutionize the industry, being the first competition of this nature to have a supermodern and high fashion television production.

The idea is to discover new talent for the modeling and television industries and to produce instant celebrities.

The Netherlands have not had a representative at the first edition of Miss Supranational.

The next 2 years, Miss Supranational Netherlands was handpicked by mrs Maes.

Nathalie den Dekker and Roline Hund were the ones to represent our country at this new European based international pageant. They did a good job, but unfortunately they did not place. For Nathalie, who would become one of the dutch pageant powerhouses, this was her first grand slam pageant

In 2012 there was no representative of the Netherlands at the pageant.

The next year, the license went to 12 Months of Beauty who sent one of the winners of their national pageant to Miss Supranational. The winner, Leila Aigbedion was the first afro – dutch woman to represent the Netherlands at a grand slam international beauty pageant. For this achievement she received several awards in the Netherlands.This year the pageant moved to Belarus, it was the first and so far only time that the finals took place outside of the country of origin Poland. 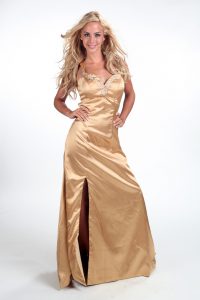 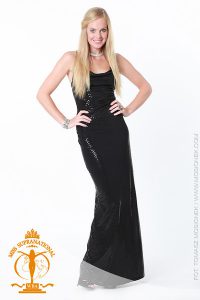 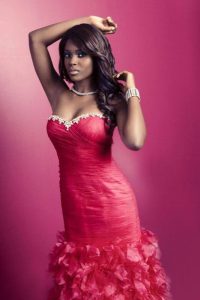 Some things changed in the international organization, and mrs Maes got the license back and she sent Cherlyn van Dalm to the 5th edition of Miss Supranational.

The year after, mrs Maes started a collaboration with the Beauty of the Netherlands organization. Their 2015 winner, Kanita Karisik, represented the Netherlands in Poland. 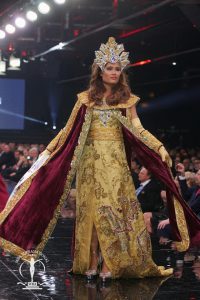 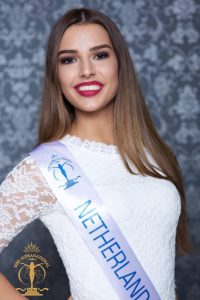 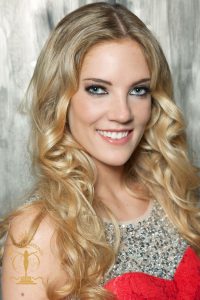 This is also the first year of Mister Supranational  and we were represented by Rico Mallee, who was handpicked. Unfortunately Rico did not place at the final show.

In august 2017, 12 Months of Beauty got the license back, and as time was very short to organize a national pageant, Lovely Shanna Boeff was appointed as Miss Supranational Netherlands 2017. Young as she was, she reached the 26th spot and just missed the Top 25. Throughout the pageant she made many friends like Miss Supranational Indonesia and Miss Korea, Jenny Kim, who would be crowned Miss Supranational 2017 in the final show. 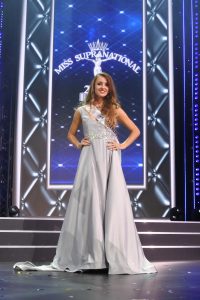 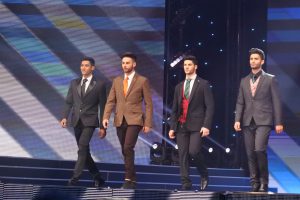 The first representative at the Mister Supranational  from 12 Months of Beauty was the handsome Ferdi Caglayan, who was also handpicked. He impressed both the other candidates and the organization by being focussed throughout the competition. He placed 19th and therefor got a podium spot.

2018 was an exciting pageant year for 12 Months of Beauty. They held their first male pageant for Mister Supranational. Ennio Fafieanie was crowned to represent the Netherlands at Mister Supranational 2018. After a very intensive period of training, Ennio headed to Poland for the competition. He was an instant favorite for winning the title and during the competition he stayed focussed to reach his goal. He won the highest subtitle which was given out, Mister Termaleo. At the finals he was one of the candidates to place high and he became 4th runner up.

After returning home, Ennio got to travel to Asia several times with his title.

Ennio is considered one of the most beautiful men of the Netherlands, in which list we can also find Ferdi, his predecessor. 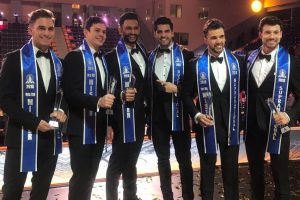 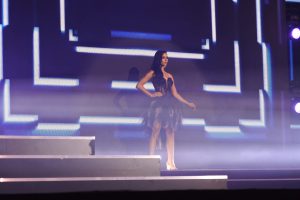 Miss Supranational Netherlands 2018 was pointed out in the person of Kelly van den Dungen. Kelly was not a stranger in the dutch pageant world, she did many national and international pageants.  Many pageant watchers believe she has one of the most contemporary faces in dutch pageantry. No wonder she got through to the Top 25 and placed 15th overall. 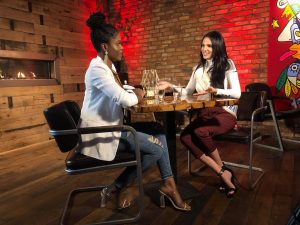 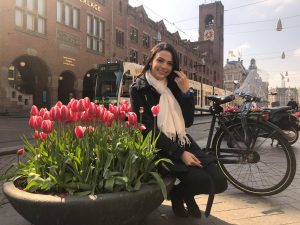 Nathalie Mogbelzada was the lucky girl to be invited by 12 Months of Beauty to represent the Netherlands at Miss Supranational 2019.

The international pageant evolved to a next level, and during the preparations and throughout the pageant there were challenges on social media for the contestants. At the final show, the first ever Miss Influencer in a grand slam beauty pageant, was chosen and our Nathalie was the lucky girl to receive the sash.

This was not the only subtitle Nathalie won, she was also crowned the most elegant girl from the competition and she also won the Supra Fan-vote.

In the end she ranked 12th in the overall pageant. Although this was the highest ranking for a dutch girl in this pageant, many believed she should have ranked higher, even in the Top 5. 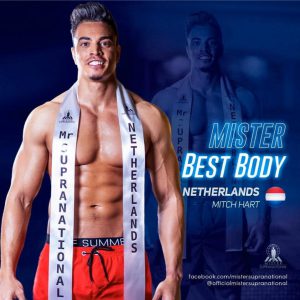 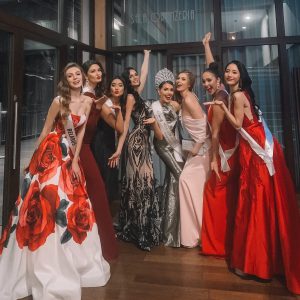 During the visit of Valeria to the Netherlands in 2019, the very sporty and very handsome Mitch Hart was appointed to represent the Netherlands at Mister Supranational 2019. As the oldest candidate he won the title of Best Body, what was his goal at the pageant, to show that as a 32 year old you can be fit and have a healthy body.

He just missed a podium spot by ending 23th at the overall competition which was a big surprise for many male pageant watchers.

So far there are 3 winners from Europe. The friendly Oksana Moria from Ukraine was the first winner in 2009, homecountry Poland produced their first winner in 2011 in the person of Monica Lewczuk and the beautiful Katsyarina Buraya from Belarus won the crown in 2012

The Americas have also gotten 3 winners so far: Karina Pinilla from Panama was the second girl to win the crown, this was in 2010, Paraguay’s beautiful Stephania Stegman won in 2015 and Puerto Rico won in 2018 with the funny and radiant Valeria Vazquez Latorre. 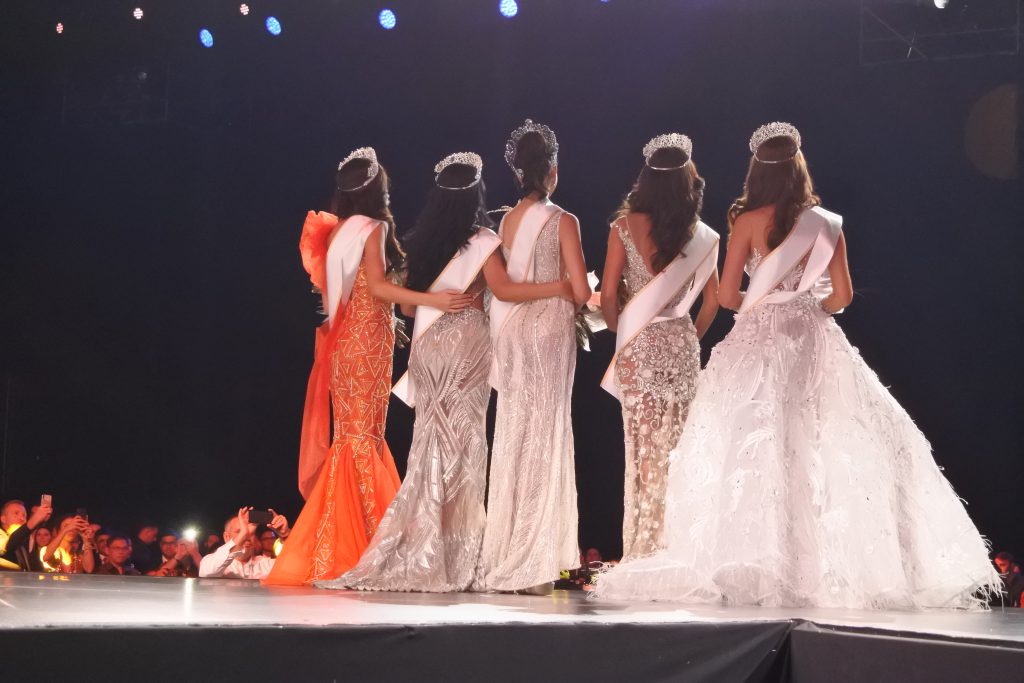 Most winners have come from Asia, so far, almost 50%. Mutya Datul from Philippines won the title in 2013, there are 2 winners from India, Asha Bhat in 2014 and Srinidhi Shetty in 2016, Korea’s Jenny Kim was the first from her country to win a grand slam pageant when she was crowned Miss Supranational 2017, and the current winner from Thailand is the lovely and natural beauty Ann Tonia Porsild.

The male pageant has gotten 1 winner from Asia: Prathamesh Maulingkar from India in 2018 and 3 winners from the Americas: Mexico’s Diego Garcia in 2016, Gabriel Correa from Venezuela in 2017 and the reigning Mister Supranational 2019 from the USA, Nate Crnkovich.

The Supranational Brand has grown into one of the most powerful in the international pageant world, as one of the new beauty pageants. In spite of the highs and lows, they have proven not just to be stable but also to grow for the past years as a grand slam pageant. Their shows are perfectly produced and in our opinion sometimes the best of all 6 grand slam beauty pageants. 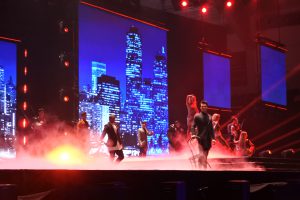 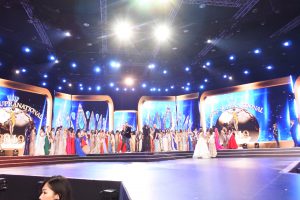 The male final shows are anyhow the biggest and best productions in the world of male beauty pageants.

Supranational is one of the most innovative brands in international pageantry, as for example they have added the influencer award for both the male and female pageant, which brings the pageant to the 21st century.