They made it, part 2: Kelly Weekers 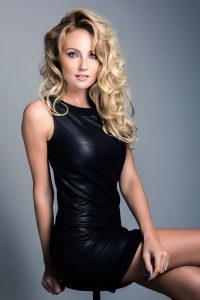 The first time Miss Nederland choose not one winner, but three. The three crowned would be called: Team Miss Nederland and would represent the Netherlands at Miss Earth 2011, Miss World 2011 and Miss Universe 2011.
From the moment Kelly Weekers was crowned Miss Limburg 2011 and entered the top 12 of the Miss Nederland 2011 pageant she was a big favorite for the Miss Universe crown together with Miss Drenthe, Jill de Robles (Miss World Nederland 2011), Luna Voce (Miss Universe Italy 2013) and Mary-Anne Kammeron.
After a week in Thailand the finals were no surprise as Kelly won the Miss Universe crown and went to Brazil to represent the Netherlands at the Miss Universe 2011 pageant.
The moment Kelly set food on Brazilian soil she was a favorite among the fans and pageant watchers. Many believed she would become a semi-finalist or even a top 10 finalist. People compared her with a living doll. So no surprise when Kelly was called out as one of top 16. Unfortunately after the bikini-round she didn’t move on to the top 10. But the dutch pageant fans were very happy, as  they hand’t seen a dutch woman place at the miss Universe pageant since 1992.
After the pageant, Kelly finished her studies as a psychologist and is currently working as one. She is engaged with famous dutch composer, John Ewbank and they expect to have a child any moment.