They made it, part 3: Vivian Jansen 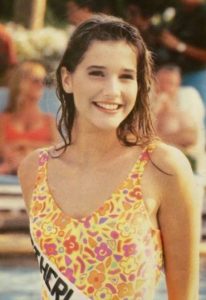 Miss Universe Netherlands was for the second time a live television show on dutch television. there were 12 finalists who all hoped to get into the footsteps of Paulien Huizinga, who had won in 1991.
It was Miss Brabant, Vivian Jansen, who won. She would go to Thailand where the international finals of Miss Universe were being held in 1992.
Miss Netherlands was one of the favorites for the crown together with many like Miss Venezuela, Miss Belgium, Miss Iceland and Miss Namibia.
When the top 10 were called there was no surprise when Vivian was called out as one of the semi-finalists. After the first round of competition, the swimwear competition, Vivian was in 3rd place. After the interview and the evening gown she was in 5th place. So she made it even to the top 6. This was just for the 4th time a dutch delegate would made the finale. Detail: It was the 3rd time in 4 years!!
After the judges question, Vivian was eliminated as 4th runner-up.
Today Vivian is working as a communication adviser and she is also working as a model.