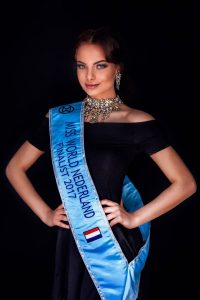 Laura Ghobrial, a 20 year old student of Business Administration at Nyenrode in Amsterdam is no newcomer in the world of beauty pageants. We, from Miss Holland Now, saw her for the first time at Miss Teen of Drenthe 2014 and in 2015 Robin judged her at Miss TT Festival Assen 2015.
In january 2016 she was crowned Miss ECO Netherlands 2016 and she represented our country in Egypt. She became a semi-finalist and made a huge impression during the Miss Talent competition and the ECO dress competition. When we talked with the journalists of Global Beauties, they told us that they believed she was one of the favorites for the crown. After the international pageant she continued to promote the message of Miss ECO Netherlands and Miss ECO International. The CEO of Miss ECO International, Dr. Amaal,  said many times in social media, that Laura was one of the few who really carried out the message of Miss ECO.
This year she entered the Miss Grand Netherlands 2017 pageant and she became the 2nd runner-up at that pageant.
We were not surprised to find out that Laura was amongst the last finalists for Miss World Netherlands 2017. She will benefit from all her experiences as a beauty queen, but also her commitment. she van handle all preliminaries at Miss World.

Could she be Miss World Netherlands 2017? Let’s wait for the finals and…. there are many more finalists to introduce….