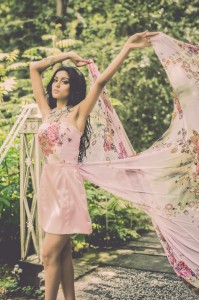 This year the Netherlands will be represented at the 15th anniversary of the Miss Earth pageant by the beautiful Leena Asarfi from Amsterdam. This beauty from indian descent is a Human Resource Management graduate, who works in this field, but she also is a model and she hopes to become a well known make up artist in the future.

Leena is no newcomer in the beauty pageant world. She was a runner up at Miss India Holland 2010, and in 2012 she was 1st runner up at the Miss Noord Holland pageant, which was a preliminary for the Miss Nederland 2012 pageant. She also represented the BeNeLux at the Miss Tourism World 2012 pageant (red: BeNeLux consists of Belgium, Netherlands and Luxemburg).
Last year Leena was crowned Miss Supranational Netherlands 2014. In the end the pageant with the finals in India was cancelled due to Visa problems caused by Ebola. Leena was of course very disappointed that the pageant , she was completely prepared for and set to go, was cancelled.

Leena was thrilled when she was asked by the organization of 12 Months of Beauty, who is the franchise holder of Miss Earth Netherlands, to represent her country at Miss Earth 2015. They are in negotiation with some other organizations to have a big final for the election of Miss Earth Netherlands 2016; because the negotiations were not finished in time to prepare the dutch participant for 2015 properly, they asked Leena to fulfill the honors.

She is already in training, and she will be prepared by the excellent team surrounding 12 Months of Beauty.

Soon: The footsteps Leena has to follow, the roaring last 5 years of Miss Earth Netherlands…….